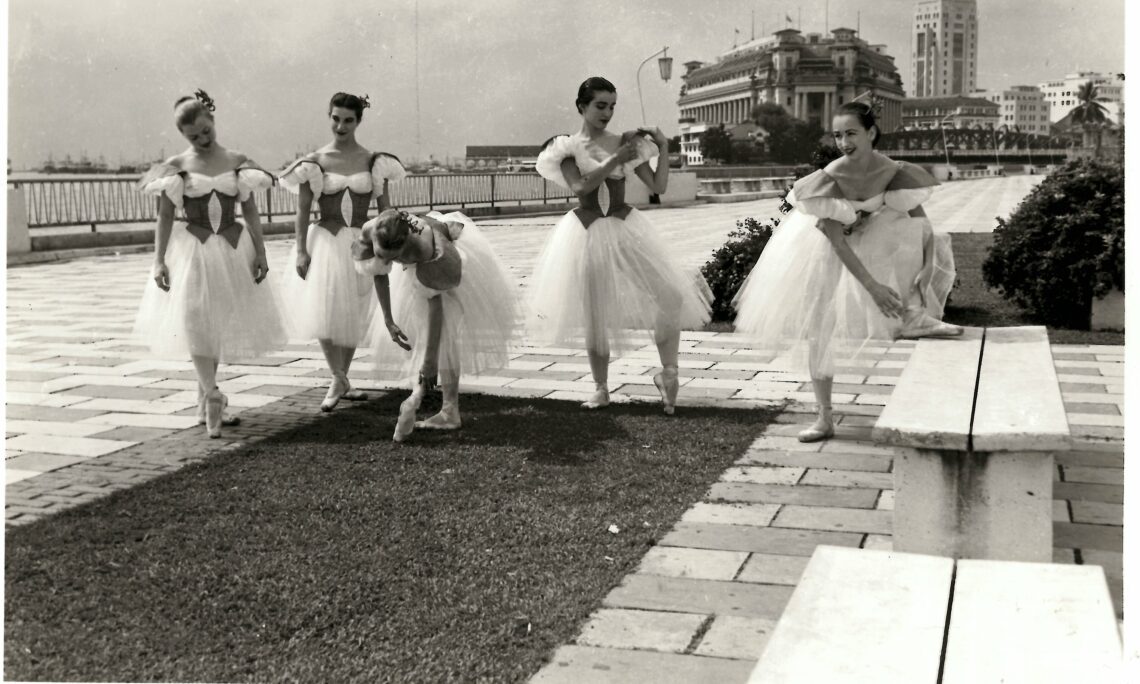 Five members of the San Francisco Ballet alighted on the War Memorial in Queen Elizabeth Walk, descended to the nearby Esplanade, and finally sat atop an old tree trunk at St. Andrew’s Cathedral. (February 13, 1960)

This year, we celebrate 55 years of diplomatic relations between the United States and Singapore, reflecting on our thriving economic, security, and people-to-people partnerships since April 4, 1966.

Mr. Geoffrey Abisheganaden was the winner of a leadership grant to tour the United States in July 1959. He is seen in the photograph being congratulated by the U.S. Consul General Mr. Avery F. Peterson. In the center is Cultural Affairs Officer Mr. Olberg.

Five members of the San Francisco Ballet caused a number of people in Singapore February 13, 1960 to rub their eyes in wonder and delight. These “fairy-like creatures” first alighted on the War Memorial in Queen Elizabeth Walk, descended to the nearby Esplanade, and finally sat atop an old tree trunk at St. Andrew’s Cathedral. The Spokesman for the ballet company explained later: “We were getting some TV and publicity pictures with a Singapore background to send home to the United States”. Caught by the cameraman just before striking a pose for him at Queen Elizabeth Walk are (left to right): Tilly Abbe, Fiona Fuerstener, Suki Shorer, Genie Bucher, and Sue Lloyd. The company was in Singapore on its Far East Tour and its two performances at the Victoria Theater were the “cultural event” of that year.

The first USIS library and offices located on the second floor of 26 Raffles Place in downtown Singapore.

The world renowned American soprano Marian Anderson visited Singapore in October 1957 to give a solo performance at the Victoria Theatre. During her short visit, she toured the premises of the Singapore Association for the Blind, where she met with Singapore’s Hellen Keller, Miss Chan Poh Lin (seated).

The Westminister Choir, when it visited Singapore in December 1956, was invited to sing sacred music by a religious group in Singapore. Here, the conductor and founder of the choir, Dr. John Finley Williamson, is seen conducting members of the choir at St. Andrew’s Cathedral.

The composer of Singapore’s National Anthem “Majulah Singapura” Zubir Bin Said (right) discusses the intricacies of a locally made bamboo musical instrument with a member of the New York Woodwind Quintet when the group, under USIS Sponsorship, performed at the Victoria Memorial Hall in September 1962.