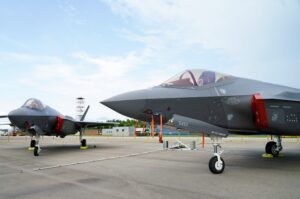 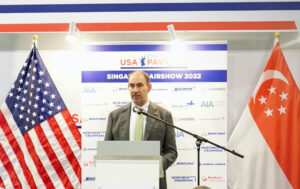 “It’s an honor for the United States to join our partners and allies at this important and strategic event.  The Singapore Airshow 2022 provides a unique opportunity for countries across the region to witness America’s reputation of excellence and innovation while clearly highlighting our desire to remain the premier security partner in the region.  The U.S.-Singapore partnership is the foundation of this commitment and I’m thrilled to see such amazing industry turnout here in Singapore,” said Ambassador Kaplan.   General Kenneth S. Wilsbach, Commander, Pacific Air Forces leads the U.S. delegation of senior U.S. government officials from the Department of Defense and the Federal Aviation Administration.

The fifth generation F-35B Joint Strike Fighter will participate in the aerial flight displays while the B-52 Stratofortress will conduct a flyby. Among the aircraft on static display are the F-35A Joint Strike Fighter, the RQ-4 Global Hawk, the KC-46 Pegasus, and the P-8 Poseidon.   As President Biden said, “The future of each of our nations – and indeed the world – depends on a free and open Indo-Pacific enduring and flourishing in the decades ahead.” To that end, the United States remains committed to ensuring the region’s seas and skies are governed and used according to international law, and will pursue an Indo-Pacific region that is free and open, connected, prosperous, secure, and resilient.

As the premier security partner in the Indo-Pacific, our participation in the Singapore Airshow 2022 demonstrates our dedication to this region.  The Airshow provides a concrete example of the United States deepening cooperation and enhancing interoperability with allies and partners.

The Indo-Pacific is the most dynamic region in the world, and its future affects people everywhere:  the American innovation, commitment, and excellence on display at Singapore Airshow 2022 offer an exciting springboard into that secure and prosperous shared future. 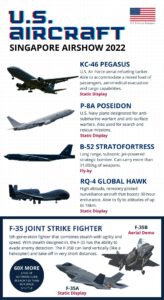 8WORLD How powerful is the F-35B fighter jet? Let this U.S. pilot tell you! (English Translation)

AFP/MSN China may take advantage of Ukraine crisis: US general