Good morning.  Thank you, Laura and the Milken Institute team for the invitation to offer opening remarks.  I also want to thank Minister for Trade and Industry Gan Kim Yong for being with us today and leading off the opening session.

Distinguished guests, friends, the theme of this year’s summit – “The Power of Human Connection” – could not be more timely.  If we have learned anything over the past two years, it is how valuable the ability to connect with each other is.  For the United States and Singapore, the depth and breadth of the connections that underpin our bilateral relationship are impressive.  Whether it be economic, security, or people-to-people ties, there are countless points where our two countries connect… and, despite the challenges of COVID, 2021 has seen some remarkable and historic moments which fully demonstrate this fact.

One of the important highlights of course was the visit of Vice President Harris in August, when Singapore became the first Asian country visited by America’s first woman, first Asian-American, and first African-American Vice President.  The Vice President’s travel was preceded by Secretary of Defense Austin in July and will be followed tomorrow by Secretary of Commerce Raimondo’s visit.  We were also pleased that Singaporean officials have been able to travel to the United States, including the FM in September, Minister for Trade and Industry in October, and the Minister ofDefense the first week of November.

Our two countries are connecting again on the world stage as well.  President Biden and PM Lee just held a bilateral meeting on the sidelines of the G20 in Italy.  In addition, Secretary of State Blinken, Commerce Secretary Raimondo, and U.S. Trade Representative Tai met with their Singaporean counterparts during the ASEAN Summit, the East Asia Summit, the APEC Summit, and of course at COP 26 in Glasgow.

All this is to say that when Secretary Blinken said the United States would show up and consequentially engage in Southeast Asia, we are doing just that!

But we’ve done more than show up.  We are working together to act on some of the most important issues facing the world today.  So far in 2021 we have launched the U.S.–Singapore Partnership for Growth and Innovation, which Secretary Raimondo will be discussing in greater detail during her visit; we announced the U.S.–Singapore Climate Partnership; strengthened bilateral collaboration through our U.S.-ASEAN Smart Cities Partnership; expanded our U.S.-Singapore Third Country Training Program to include new courses on climate change and sustainability; deepened our cybersecurity cooperation with three new agreements; began working bilaterally and multilaterally to strengthen the world’s supply chains; and also re-affirmed our deep commitment to upholding peace, security, and stability in Southeast Asia.

The United States and Singapore are moving from strength to strength, across a wide range of our bilateral partnership.

My friends, I would be remiss if I didn’t mention the critically important role the private sector plays in so much of our relationship.  Most of you are aware, but it bears repeating:  the 5,400 U.S. companies based in Singapore have created more than 200,000 jobs in this country.  U.S. companies are not only an engine for job creation, innovation, and creativity, you also put a premium on training and professional development and you treat your employees right.  I can’t tell you how proud I feel when the Straits Times Survey of Best Employers in Singapore comes out each year; and I see so many U.S. companies in the lead.  Thank you!  Thank you for representing our country and our values so well.  The United States is also, and by a large margin, the leading Foreign Direct Investor in Singapore at $315 billion USD.  That’s larger than U.S. FDI in China, India, and South Korea combined!  Finally, we are most pleased that Singapore’s investments in the United States are also on the rise, creating jobs and new opportunities for American workers as well.

I think Vice President Harris put it best when she said, “I believe that when the history of the 21st century is written, much of it will be centered right here in the Indo-Pacific.”  And it was also in Singapore that she announced that the United States is offering to host APEC in 2023.

The United States will continue to pursue a free and open Indo-Pacific that promotes our security and economic interests and those of our partners and allies.  Recently President Biden hosted the first in-person Quad Leaders meeting in Washington.  Beyond the Quad, together with the UK and Australia, we recently announced the AUKUS trilateral security partnership, investing in two of the United States’ most enduring alliances to help ensure a free and open Indo-Pacific continues for decades to come.  And the United States is committed to continue to work multilaterally with and through ASEAN, an organization central to Southeast Asia’s architecture.

In closing, you may recall when I said earlier that 2021 has seen some remarkable and historic moments for the U.S.–Singapore relationship.  One such moment is the 55th anniversary of our bilateral relations.  The United States and Singapore’s shared history has built a strong foundation for a secure, prosperous, and innovative shared future.  But these past 55 years of partnership are just the beginning.  Through our defense and security agreements, our longest free trade agreement in Asia, and the deep ties between our people, the strong and enduring partnership between the United States and Singapore continues to flourish.

To celebrate our partnership, we recently launched a new virtual photo exhibit entitled, “From Sea to Shining Sea: 55 Years of U.S.-Singapore Relations in Photos.”  I encourage you all to visit USSG55inphotos.com to see how our relationship and human connections have evolved over the last 55 years.

Thank you for all you do here in Singapore and across the region.  I wish you all the best for the Milken Institute Asia Summit and hope you make as many “human connections” as is safely possible.  Thank you again very much! 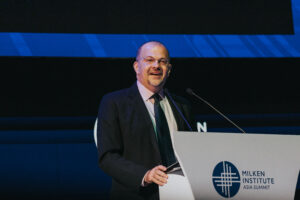