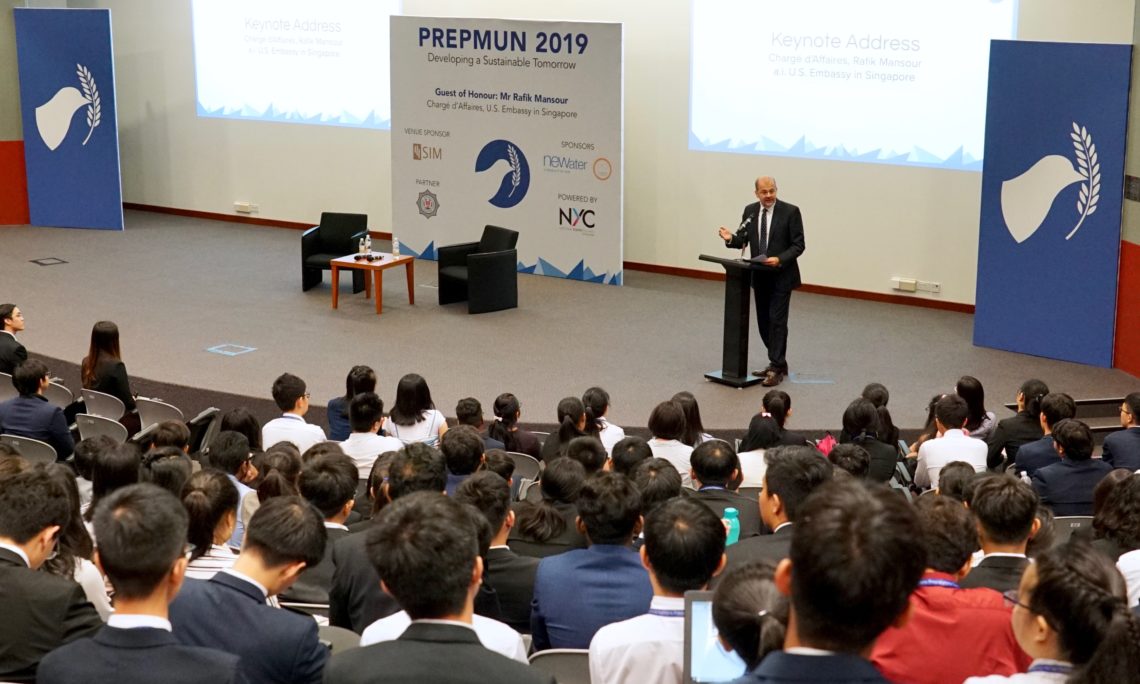 For Immediate Release
REMARKS (as delivered)

Wow. I’ll start by telling you that I’m absolutely delighted to be in the company of hundreds of young, bright Singaporean students. Being in such company always gives me positive energy.

As I start, I would like to give a special shout-out to the students at SIM. Over the years, the U.S. Embassy here in Singapore has benefited from the valuable contributions of many interns from SIM – and I’ve greatly enjoyed working with some SIM students and listening to their fresh ideas and perspectives. I applaud all of you here today for taking the initiative to participate in this Model United Nations prep conference to consider the future and your place in shaping it, and hopefully your place in leading it.

As we move further into the 21st century, diplomatic strategy and engagement will need to adapt to an increasingly inter-connected world, but ultimately, international relations will continue to be shaped by our values. The United States works through multilateral institutions like the United Nations to advance human rights and human freedoms around the world, ensuring that future generations live even better lives in the years to come.

American foreign policy is predicated on the belief that the world is safer and more prosperous if all people are free to achieve their greatest potential within sovereign, independent states governed by rule of law and equal protections of individual liberties. The U.S. Government’s Indo-Pacific Strategy envisions a free and open Indo-Pacific where all countries prosper side by side to promote a robust civil society, again, the rule of law, transparent and accountable government, protection of human rights, and the inclusion and participation of groups traditionally excluded from politics and public life across the region. This strategy is based on values that have underpinned peace, stability, and prosperity in this region for generations.

These shared values allow for collaboration between the United States and Indo-Pacific countries on multiple fronts. U.S. businesses, government agencies, and institutions drive private sector investment and gainful employment in infrastructure, energy, and the digital economy, strengthening civil society and democratic institutions, countering transnational threats, and investing in human capital across the Indo-Pacific.

Throughout my career as an American diplomat, I have had the honor and privilege of representing these values across the world – from Haiti, to Russia, to Armenia, and now Singapore, and many places in between. But the common thread linking my years of diplomatic service is that in every single place where I have served, I have tried – and many times managed to succeed – to leave a positive impact both in the lives of the people and the relations between the United States and their country.

I understand that the topic of the conference is “Developing a Sustainable Tomorrow.” The United States continues to be a global leader in promoting sustainability initiatives, particularly in the way our private sector creates innovative solutions that result in better products, better services, and better outcomes for Planet Earth. There are many examples of this right here in Singapore, where there are more than 4,500 U.S. companies.

Did you know that, for example, the 3M Company, perhaps best known for products like Post-it Notes and Scotch Tape – has designed a production process here in Singapore that has prevented over 13,000 metric tons of waste from entering our environment since 2001? That’s 17 Olympic-sized swimming pools of pollution and waste that have been avoided.

Of course, in creating a sustainable future, the greatest asset every country has is its people. The Indo-Pacific accounts for over half of the world’s population. U.S. companies have invested trillions of dollars to develop the skills, knowledge, and experience of local workforces through professional training and development, investments in local infrastructure, and improve competitiveness. The U.S. Embassy in Singapore and U.S. Embassies around the world facilitate capacity building and knowledge sharing through exchange programs such as Fulbright, the International Visitor Leadership Program, and the Young Southeast Asian Leaders Initiative. And I am confident that many of you will go on and have experiences in the United States through some of these programs that I have just mentioned. And that will be a tremendous gain both for you and for the United States.

More than 100 current or former heads of state and at least 360 current or former cabinet ministers in the Indo-Pacific region have participated in U.S. Government-sponsored exchange programs. And here in Singapore, believe it or not, half of the current cabinet of Singapore, half of the current ministers here in Singapore are U.S. educated, showing that an American education offers the skills and knowledge necessary to become a future leader, regardless of your country of origin.

You know these mosquitoes we often see in the region? Very recently, with U.S. support, the U.N. and World Health Organization have made great progress using mosquito sterilization technology to minimize two species of mosquitoes that carry dengue, Zika, yellow fever, and the other infectious diseases that affect 3 million people every year. There will still be mosquitoes. They are – unfortunately – vital to the food chain. But we have taken the first step to potentially eliminate the ones that transmit disease, enabling people all over the world to live longer, healthier lives, and showing the value that multilateral diplomacy and international cooperation can play in solving real life problems.

The United States will continue to be a regional and global leader, working with our partners to create lasting solutions to global challenges.

So, as you go about drafting Model U.N. proposals to solve the problems of the world, think big, think critically, and think broadly. What are your values? What future do you want to build and help lead? The greatest ideas to confront the challenges we face now will come from people like you. So, with that, I’m delighted once again, to be here with you today and I look forward to our conversation and our exchange.