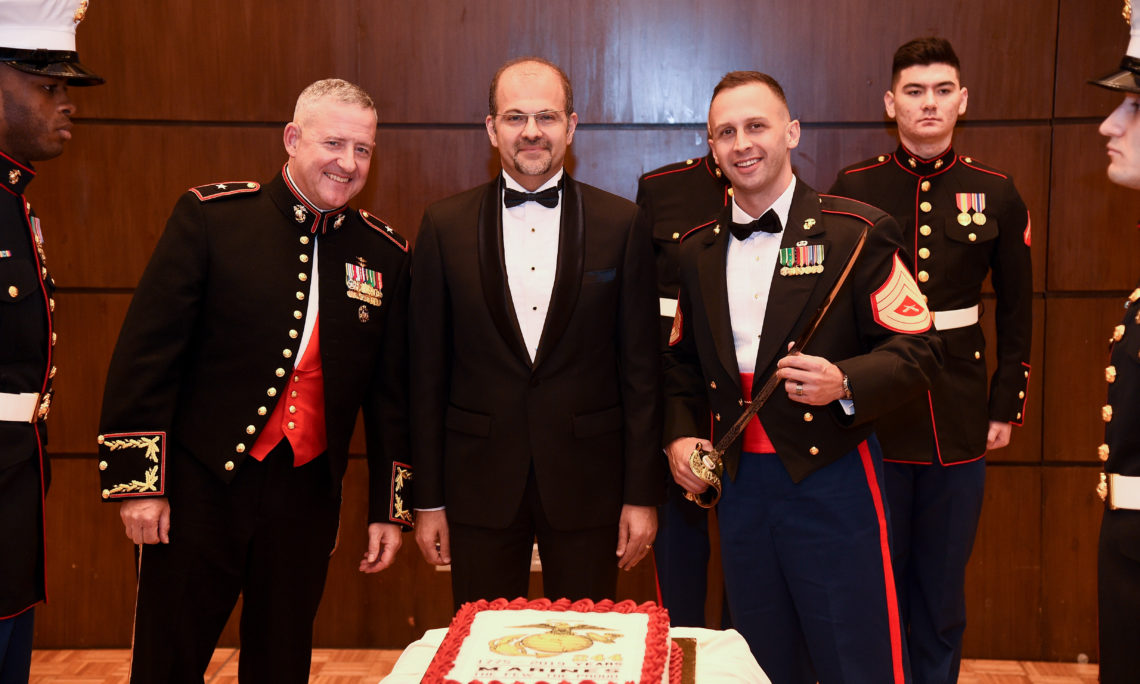 For Immediate Release
REMARKS (as delivered)

Good evening. I am honored to welcome you to our celebration of the 244th Birthday of the United States Marine Corps, at the impressive and historic Goodwood Park Hotel in Singapore.

Only one short month ago I had the privilege of delivering my remarks on the occasion of the 244th Birthday of the United States Navy. It was a memorable and enjoyable evening indeed that my venerable resident Marine Attaché described as “a proper warm-up” to the “far more prestigious occasion” we’re gathered here to celebrate this evening. I assure you, having known and worked closely together with many U.S. Defense Attachés over my tenure in the Foreign Service, that healthy Inter-Service rivalry is alive and well in the United States Armed Forces. I would just note that our Senior Defense Official, Captain Silas Ahn, is a Navy Officer and so I will let him settle this issue peacefully, I trust, with our Marine Attaché after the Marine Ball.

For the last 70 years United States Marines have faithfully guarded United States diplomatic missions throughout the world. In the aftermath of World War II, when international tensions were on the rise once again and a new era of Cold War diplomacy began to take shape, the United States Department of State needed a guard force that was young, alert, well trained, and above all blessed with military discipline. Particularly this last critically important requirement, according to my Marine Attaché, ruled out any other branch of the U.S. military but the Marines. And so, in 1949 the first 300 Marines to graduate from the newly established Marine Security Guard Program were assigned to Foreign Service posts around the globe. Today, with over 1,300 Marine Security Guards serving at U.S. diplomatic facilities worldwide, we proudly continue this longstanding tradition.

Over the course of my 20 years in the Foreign Service, I’ve had the privilege of serving with United States Marines at nine different Embassies from Haiti to Libya to Singapore. And each year around the 10th of November, when we reflect on the Marine Corps’ illustrious history and we pay tribute to the service of all Marines whenever they answered our nation’s call in years past, and wherever they stand ready to answer her call today, I smile quietly, with humility, and the utmost respect. In learning about the places I’ve been assigned as an American diplomat, I often discovered U.S. Marines had made history. For instance, in Libya, Marines fought the first land battle of the United States on foreign soil, prevailing against a much larger force, and winning a decisive victory at the battle of Derna to end the First Barbary War; an event that is immortalized in the lyrics of the Marines Hymn with the line “to the shores of Tripoli.”

Over the years I’ve had the great pleasure of getting to know many of this magnificent breed of warriors, on a personal level; some became dear friends of mine and my family’s, some continued serving their Corps and Country in uniform while others embarked on new journeys, some continue to bear the scars of war and human conflict, and some made the ultimate sacrifice so that we may live in peace and freedom at home.

In each case, I discovered that Marines don’t ask for much, but the opportunity to serve their nation wearing the uniform of a United States Marine. Their selflessness, dedication, patriotism, confidence in their fellow Marines are just a few of the many traits that I learned to admire when I broke bread, shared drinks, and exchanged life stories with them. And let me tell you, Marines have captivating stories. Just ask Sgt Bill Hook, USMC, one of the legendary China Marines who is with us this evening; a participant in the WWII Campaigns of Guadalcanal, Guam, and Okinawa, and an eye-witness to the surrender of half a million Imperial Japanese soldiers in North China during the days immediately following the Japanese government signing the unconditional surrender document aboard the USS Missouri in Tokyo Bay.

For the past quarter century U.S. Marines have trained, operated, learned, and shared together with their Singapore brothers-in-arms, the Singapore Army Guards. The Guards like their Marine brethren are a small, elite, amphibious force, tenacious in pursuit of mission accomplishment, and always ready. Today, the United States and Singapore are fortunate to have a generation of Marines and Guardsmen who have forged strong bonds, built mutual trust and respect, enhanced combined military capability and stand shoulder-to-shoulder, ready to respond to any contingency or crisis that would visit us. For this I’m especially grateful and honored to share a table this evening with the Singapore Army Chief Guards Officer, Brigadier General Seet.

I am equally grateful and honored to welcome the Deputy Commander, Marine Corps Forces, Pacific, Brigadier General Robert Sofge, who travelled from his headquarters on Camp Smith, Hawaii, to be with us this evening to deliver his remarks.