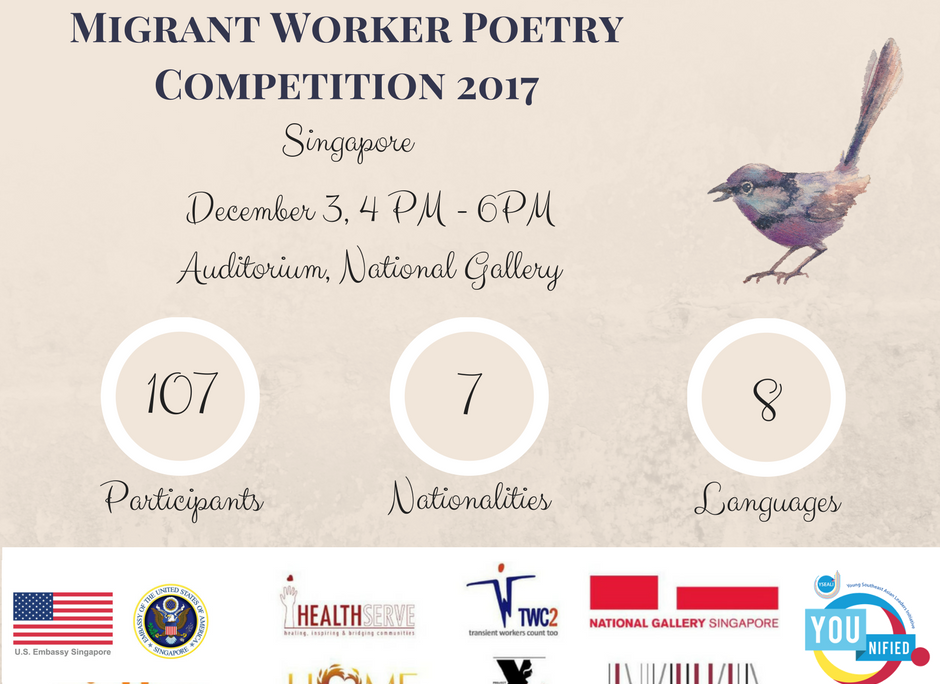 Back for its fourth Singapore edition , the finals of the annual Migrant Worker Poetry Competition (MWPC) will showcase work from 19 poets in 8 different languages representing 7 different countries.

SINGAPORE, December 03, 2017 – Back for its fourth Singapore edition , the finals of the annual Migrant Worker Poetry Competition (MWPC) will showcase work from 19 poets in 8 different languages representing 7 different countries.

In the first round of the competition, a panel of judges reviewed 107 submissions and shortlisted the finalists to perform and compete at the National Gallery on December 3rd 2017. Poets Zhou Decheng, Amanda Chong, and playwright Haresh Sharma from The Necessary Stage will be judging the finals this year.

Shivaji Das, writer and management consultant, and one of the organizers for the competition said, “We have received an overwhelming response this year with nearly 50% increase in the number of contestants including entries from new groups such as migrants from Myanmar. And apart from increased participation, the most encouraging aspect is the way these migrant workers themselves have volunteered in organizing the event itself while working in cross-cultural groups. ”

U.S. Embassy Singapore is supporting the competition for the third year in a row.

“We are honored to lend our support to the 2017 Migrant Worker Poetry Competition. This event is a wonderful platform for creative expression by the men and women who work hard each day to help build and maintain the Singapore success story. With International Human Rights Day upon us, this is an especially good time to reaffirm our commitment to ensuring that all people have the opportunity to make their voices heard. The Migrant Worker Poetry Competition does exactly that,” said Stephanie Syptak-Ramnath, Chargé d’Affaires, ad interim, U.S. Embassy Singapore.

In addition to the readings by the finalists, the event will feature a launch of ‘Songs From a Distance’, a compendium of past poetry submissions published in collaboration with Transient Workers Count Too (TWC2), Potato Productions, and the Migrant Worker Poetry Competition Singapore. A short play, written and directed by members of the migrant worker community under the mentorship of Haresh Sharma of the Necessary Stage will also be performed.

The Migrant Worker Poetry Competition Singapore is an annual competition that started in 2014 as a venue for migrant workers to share their stories. Since then, the competition has spread regionally, with two iterations in Kuala Lumpur. Following their participation in the competition,  a number of previous contestants have gone on to showcase their work in Singapore’s literary scene, participating and collaborating with fellow artists in events such as the Singapore Writers Festival. Some have also published their poems with local and international presses, and a few poets were featured in documentary films.