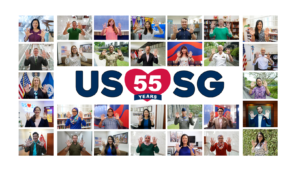 Starting this month, a combination of digital and traditional media elements branded with #USSG55 will showcase the United States and Singapore’s shared history, built on a strong foundation for a secure, prosperous, and innovative shared future. To kick off the campaign, a dedicated website will serve as a portal for the year’s events, programs, press releases, photographs, and more.

In addition, academics, government officials, journalists, alumni, and the general public can join a multi-faceted symposium series the Embassy is organizing, featuring discussions on themes such as security, economics, and people-to-people ties to underscore the strength of the bilateral cooperation and explore ways to advance the partnership.

There will also be a photo exhibition to display American and Singaporean moments in history and showcase the milestones in the relationship including photos from personal collections from the last 55 years and beyond.

We will also celebrate our common food culture, through a chocolate making workshop mixing Singaporean and American flavors, as well as other explorations of food connections.

Follow #USSG55 on the Embassy’s social media platforms (Facebook, Twitter, Instagram, YouTube) for more on the shared history between United States and Singapore including facts and figures on the bilateral partnership. The Embassy is also running various anniversary campaigns on our social media platforms, such as the 5-5 hands photo action that we invite everyone to join.

In his remarks, Chargé Mansour said, “The past 55 years of partnership are just the beginning. Through our defense and security agreements, our longest free trade agreement in Asia, and the deep ties between our people, our enduring relationship brings strength and stability to the United States, Singapore, and the entire Indo-Pacific region.”

Before the formal diplomatic relations between United States and Singapore were officially established in 1966, the two countries shared key events in history as early as the 1800s as seen in this timeline of events. For decades, tens of thousands of Americans living, studying, and working here have valued Singapore’s generous hospitality, level playing field, and boundless opportunity. The United States and Singapore’s long-standing connection over the years spans from notable Singaporean alumni of U.S. government exchange programs to robust business relationships.