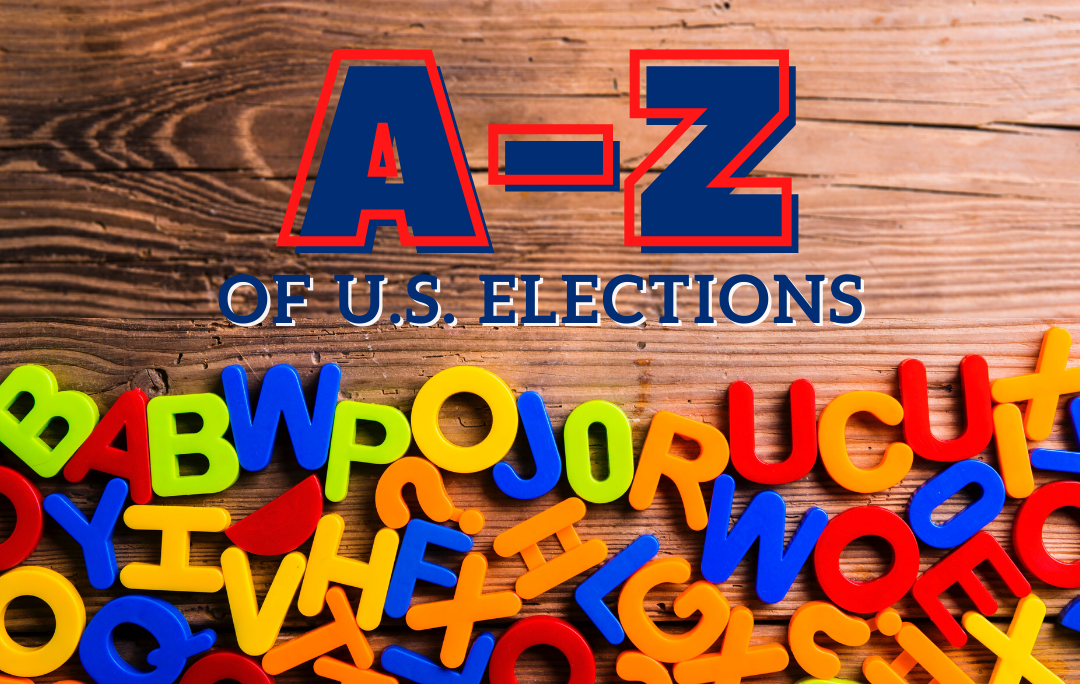 Here are some selected glossary and facts about the U.S. Presidential Elections, in alphabetical order:

Absentee voting allows voters who cannot come to polling places to cast their ballots. A variety of circumstances, including residency abroad, illness, travel or military service, can prevent voters from coming to the polls on Election Day. Absentee ballots permit registered voters to mail in their votes. The Uniformed and Overseas Citizens Absentee Voting Act, a federal law, governs absentee voting in presidential elections. Absentee voting rules for all other elections are set by the states, and vary. In Oregon, all elections are conducted by mail, but voters have the option of voting in person at county polling stations.

Blue state is a term used to refer to a U.S. state where the majority of voters usually support Democratic candidates and causes.

The Donkey represents the Democratic Party. Presidential candidate Andrew Jackson was the first Democrat to be associated with the donkey symbol. However, the most lasting impression came from the cartoons of Thomas Nast, which pictured the Democratic Party as a donkey, an animal considered stubborn. The Democratic Party, demonstrating a sense of humor, accepted the animal as its unofficial symbol, observing that the donkey and the Democratic Party share many fine qualities, such as not giving up easily. They have used various donkey designs on publications over the years.

The Elephant represents the Republican Party. Political cartoonist Thomas Nast created both images for the publication Harper’s Weekly in 1874. One of his cartoons depicted a marauding elephant to represent the “Republican vote.” Republicans quickly embraced the symbol as their party’s own and use the design widely. Over the years, the donkey and the elephant have become the accepted symbols of the Democratic and Republican parties.

Once the primary elections or conventions conclude, the general election is held to determine who will be elected to hold office. In the general election, voters make the final determination from among the party candidates listed on the ballot. The general election ballot may also include independent candidates (those not affiliated with a major political party) who gain access to the ballot by submitting a specified number of petition signatures, rather than by the traditional primary method. Furthermore, in some states, the ballot may include a place to “write in” the names of candidates who were neither nominated by the parties nor qualified by petition. Such candidates may be described as “self-nominated” and they win election to public office from time to time.

Used as a metaphor for an election campaign, “horse race” conveys the feeling of excitement that people experience when watching a sporting event. The term also refers to media coverage of campaigns, which frequently emphasizes the candidates’ standings in public-opinion polls — as if they were horses in a race — instead of the candidates’ stands on the issues.

Candidates and their supporters have been quick to adopt the Internet as a campaign tool. It has proved to be an effective and efficient way to solicit funds from potential supporters and to promote one’s policies and experience. Campaign organizations now maintain their own blogs. The bloggers on these sites are campaign staffers paid to write about the statements and activities of their particular candidates. Meanwhile, thousands of independent bloggers write commentaries in support of their favorite candidates and engage in debate with other bloggers who oppose them.

John F. Kennedy was the 35th President of the United States (1961-1963), the youngest man elected to the office. On November 22, 1963, when he was hardly past his first thousand days in office, he was assassinated in Dallas, Texas, becoming also the youngest President to die. President John F. Kennedy famously suggested the American people: “Ask what you can do for your country.”

A wide variety of voting devices is available in the United States, and the landscape of voting technologies is continuously changing. Some jurisdictions still use “lever” machines, on which voters turn a small lever next to the names of the candidates they prefer or the side of an issue they support.

An election for seats in the U.S. Senate and House of Representatives that occurs during a presidential term of office — that is, two years into the four-year presidential term. The results are sometimes interpreted as a popular referendum on that president’s performance for the first two years of his term. Midterm elections determine some members of the U.S. Senate and all members of the House of Representatives, as well as many state and local officials.

Advertisements that try to persuade voters to vote for one candidate by making the opponent look bad; by attacking either the opponent’s character or record on the issues.

Each federal elected office has different requirements, laid out in Articles I and II of the U.S. Constitution. A candidate for president, for example, must be a natural-born citizen of the United States, at least 35 years old, and a resident of the United States for at least 14 years. A vice president must meet the same qualifications. Under the Twelfth Amendment to the U.S. Constitution, the vice president cannot be from the same state as the president.

Red state refers to a U.S. state where the majority of voters usually support Republican candidates and causes.

Widespread use of the phrase “Super Tuesday” dates from 1988, when a group of Southern states banded together to hold the first large and effective regional group of primaries in order to boost the importance of Southern states in the presidential nomination process and lessen the impact of early votes in the Iowa caucus and New Hampshire primary. Today, the meaning of the phrase is blurred, a reflection of the fact that, during the presidential primary season, there may be several groups of state primaries in various regions falling on one or more Tuesdays. These groupings are important because the weight of such a large, simultaneous vote tends to make or break would-be presidential nominees as so many convention delegates are selected at once. In 2020, Super Tuesday was on March 3.

Republicans and Democrats have dominated electoral politics since the 1860s. This unrivaled record of the same two parties continuously monopolizing a nation’s electoral politics reflects structural aspects of the American political system as well as special features of the parties.

Undervote occurs when the number of choices selected by a voter in a contest is less than the maximum number allowed for that contest or when no selection is made for a single choice contest.

Voting is a fundamental right and responsibility of U.S. citizens — the right to have a say in how they are governed and the responsibility to be informed about candidates and issues when they go to the polls.

Jeannette Rankin, a Republican of Montana, took her seat in the U.S. House of Representatives on April 2, 1916, as the first woman elected to Congress — even before the Nineteenth Amendment in 1920 gave all American women the right to vote in elections.

Rankin maintained that women’s talents and expertise were needed to build better societies. “Men and women are like right and left hands; it doesn’t make sense not to use both,” she said.

In 1932, Hattie Caraway, initially appointed to fill her late husband’s seat, became the first woman elected to the Senate in her own right, representing Arkansas. Nicknamed “Silent Hattie” for the rarity of her public speeches, Caraway took her responsibilities seriously and built a reputation for integrity.

Margaret Chase Smith represented Maine first in the U.S. House of Representatives and then in the U.S. Senate — the first woman to serve in both chambers of Congress. In 1964, Republican Smith became the first woman considered for the presidential nomination at a national convention; she lost to Barry Goldwater.

A wide variety of voting devices is available in the United States, and the landscape of voting technologies is continuously changing. Today, there are very few places where voting takes place with handheld paper ballots marked with an “X” next to a candidate’s name, as was done in the past, but many computerized systems still depend on paper ballots on which circles are filled in or lines connected. These ballots are then scanned mechanically to have the votes recorded; the equipment is known as an optical scan system.

Elections occur in every even-numbered year for some federal and most state and local government offices in the United States. Some states and local jurisdictions hold elections in odd-numbered years.

The next U.S. Presidential election is in 2020.

John Zogby, founder of the “Zogby Poll” and the Zogby companies, is an internationally respected American pollster, opinion leader and best-selling author. His polling incorporates both phone-based polling and interactive, internet-based polling. John Zogby’s Poll called the 1996 presidential election with pinpoint accuracy. And he did it again in the following two elections. His presidential polling remains among the most accurate through five elections. He has served as an on-air election analyst for NBC News, BBC, CBC, ABC (Australia), and has been featured by the Foreign Press Center in Washington every election night since 1998.